Getting started with IBM Cloud Pak® for Security – Introduction and Installation

On16 Sep 2014 IBM announced Watson Analytics, a breakthrough natural language-based cognitive service that can provide instant access to powerful predictive and visual analytic tools for businesses. Watson Analytics is designed to make advanced and predictive analytics easy to acquire and use. 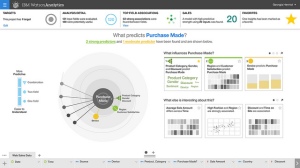 Watson Analytics offers a full range of self-service analytics, including access to easy-to-use data refinement and data warehousing services that make it easier for business users to acquire and prepare data – beyond simple spreadsheets – for analysis and visualization that can be acted upon and interacted with. Watson Analytics also incorporates natural language processing so business users can ask the right questions and get results in terms familiar to their business that can be read and understood or interacted with e.g.Who are my most profitable customers and why?  or Which customers are showing signs that they might be considering defecting to a competitor? or Which sales opportunities are likely to turn into wins?  or Why are these products being returned?

I think the most amazing aspect is that Watson Analytics not only can show what is likely to happen but also what you can do about it e.g. What actions could I take that would improve my chances of closing specific deals in the pipeline? Where should we be focusing our loyalty programs?

This is where Watson Analytics distinguishes itself from the crowded analytics marketplace. IBM makes really advanced business analytics accessible to any business user anywhere and that too without a cost! In the freemium business model a product or service is provided free to a large group of users, but a premium is charged for access to more data sources, data storage and enterprise capabilities.

Beta for the service is expected to launch September, with availability later this year. Don’t wait! Check out IBM Watson Analytics!

There has been a lot of buzz around IBM Watson ever since, it defeated Brad Rutter and Ken Jennings in the Jeopardy! Challenge of February 2011. Recently again there has been much activity surrounding IBM Watson, when IBM did a press release stating that its forming a new Watson group to meet growing demand of cognitive innovations. In addition to launching the IBM Watson Group, IBM also announced three new services based on Watson’s cognitive intelligence, IBM Watson Discovery Advisor, IBM Watson Analytics & IBM Watson Explorer.

In this blog post, I want to share how one can create cognitive applications using IBM Watson. To start with, we need to first understand what is cognitive computing. Originally referred to as Artificial Intelligence, the term ‘Cognitive computing’ is not just a newer term but also an re-engineering to make the computer systems model like a human brain. The key difference is that artifical intelligent system lack ability to learn from its experience. I like what I read somewhere tha, Cognitive computing aims to reverse-Engineer the mind! Cognitive computing systems learn and interact naturally with people to extend what either humans or machine could do on their own. These are machines of tomorrow and will completely change the way people interact with computing systems. IBM Watson represents a first step into cognitive systems. Following three form the core to IBM Watson –
1. Natural language processing by helping to understand the complexities of unstructured data
2. Hypothesis generation and evaluation by applying advanced analytics to weigh and evaluate a panel of responses based on only relevant evidence
3. Dynamic learning by helping to improve learning based on outcomes to get smarter with each iteration and interaction

This redguide will help you understand insides of IBM Watson and how it works.

Companies can embed Watson’s cognitive capabilities in their application without the need for building deep natural language, machine learning and ranking algorithms or other core technology skills. They could accomplish this by being able to embed the Watson platform capabilities as a service, through the use of API and tools on the Watson Developer Cloud.

Application Programming Interface (API) : The Watson Question and Answer API (QAAPI) is a Representational State Transfer (REST) service interface that allows applications to interact with Watson. Using this API, one can pose questions to Watson, retrieve responses, and submit feedback on those responses. In addition to simple question and responses, Watson can provide transparency into how it reached its conclusions through the REST services. There are other functions like ingesting content in the Watson platform that will also be exposed as tools and APIs and can be accessed from within an application.

2. Post question : The question needs to be in a JSON format. The output can be customized by passing in the number of responses to return with the question itself, along with additional insights into how Watson handled the question.

3. Receive response : The output from Watson contains not just the response, but it also contains the confidence score, the evidence and other metadata about the response. Some of this information provides insight into how the question was interpreted by Watson. If there is an error condition with the pipeline, additional information is returned in the “errorNotifications” and is helpful in working with IBM Support.

4. Process response : The response can be shown to a user asking the question as-is, or it could passed on to another component for additional processing before it is displayed to a user. It could be used to visually represent the response(s), create a way to ask additional simulated questions or process the answer to obtain additional insights on the interactions. After Watson provides the response, the application developer is responsible to integrate that response seamlessly into their application.

In this manner by creating applications to embed Watson’s cognitive skills, Watson can enable businesses and consumers to have a dynamic exchange, leading to insights and new, synergistic ways of thinking. This can enable companies to
• Gain insights from a hitherto largely untapped sources of unstructured content
• Converse with clients or users in a way that humans would – using natural language
• Enhance the knowledge in the company’s domain with a system that learns over time.

Further to my earlier post, I was questioned on the migration from IBM SmartCloud Enterprise to the IBM SoftLayer cloud environment. I thought surely it is important to have this information readily available. Yes, it indeed is!
I am blogging my understanding on this migration activity just to verify from my side that customers would be comfortable with the process. I find the process to be quite straight forward and uncomplicated, nothing which should bring concern to customers.
There are strong reasons for recommending this migration to SCE customers. Customers will have One portal, one API, one platform with the stability, support and trust you have always received through your relationship with IBM. As a SoftLayer customer, gains are :
Unmatched flexibility, customization and control for Internet-scale applications with 1600+ functional calls and 200+ services
Unparalleled speed with integrated high-performance bare metal and virtualized servers in public, private or hybrid cloud configurations
Flexibility to take advantage of a wide range of storage, network and security options
Ability to create Internet-scale distributed compute environments in minutes and control through a single management system via API, browser or mobile app

Per the migration web link, ‘On 8 July 2013, IBM® announced the acquisition of SoftLayer, the industry’s only seamlessly unified global cloud computing infrastructure. Security, scalability, and on-demand access to virtual server and storage resources are important to IBM SmartCloud® Enterprise (SCE) customers. SoftLayer delivers global, high-performance cloud computing infrastructure able to support applications at Internet-scale. With SoftLayer’s global cloud environment, you can have it all: One portal, one API, and one platform with the stability, support, and trust you have always received through your partnership with IBM. IBM is encouraging all SmartCloud Enterprise customers and partners to migrate eligible workloads to the SoftLayer cloud environment. To assist in this migration, IBM is providing the use of a fast and easy migration tool to streamline the process. In addition, the IBM team has created a set of information and education resources to help you with your transition to SoftLayer. If you need additional support, contact an IBM representative at Migr8Me@us.ibm.com.’

There a testing or sandbox area where customers can validate their workload under SoftLayer. SoftLayer offers a one month free trial on one CloudLayer Computing public cloud instance. Remember that an instance migration from SCE to SoftLayer may cause service disruption. Although the original SCE instance should remain active during the entire migration process, we recommend that you take appropriate precautions and backup methods.

One option for the migration is to use Racemi CloudPath. Racemi Cloud Path for IBM is a no charge [ See T&C ], Software as a Service (SaaS) tool that enables customers to quickly and easily migrate their existing physical, virtual, or SmartCloud Enterprise cloud servers to IBM’s SoftLayer CloudLayer platform in an automated, unattended way. With Racemi Cloud Path for IBM, you can now automatically move your existing IBM SmartCloud Enterprise (SCE) servers to the new SoftLayer platform and experience minimal downtime of your existing SCE workload. Cloud Path for IBM provides an automated cloud instances migration process that moves the entire server stack to the new SoftLayer environment in a few easy-to-follow steps, without the need to make additional setting changes on the SCE servers.
The article on getting started on the migration, documents crystal clear and easy 10 steps –

1) Analyze your current SCE usage, including items such as operating systems, VM sizes, persistent storage requirements, reserved IP addresses, applications and services used.
2) Read & Understand Migrating VM instances from SCE to SoftLayer using Racemi Cloud Path service.
3) Read Mapping SCE VM sizes to equivalent configurations in SoftLayer and Mapping IBM SmartCloud Enterprise service names, terms, and concepts to SoftLayer to help you understand differences between SCE and SoftLayer.
4) Identify which of your workload VMs you wish to migrate.
5) Identify your workloads that can be migrated using the Racemi tool and those that must use another method.
6) Create accounts in SoftLayer and Racemi.
7) Migrate your workloads.
8 ) Test and validate your migrated workloads on SoftLayer. Verify that your migration was successful using your normal testing methods.
9) Close your SCE account. This will avoid any unnecessary billing for SCE resources.
10) Send an email to migr8me@us.ibm.com if you have questions regarding migration to SoftLayer.

Details of these steps are available on this IBM DeveloperWorks article http://www.ibm.com/developerworks/cloud/library/cl-sce-migration-get-started/index.html

NOTE: Please do note that this post is only for informational purpose and NOT an advice or consultation for the migration activity. Please contact IBM representative at Migr8Me@us.ibm.com for any further queries, details or request for engagement for migration.

Maya Shenoi is an IT professional resident in Bangalore, India. She has varied interests including literature and movies.
Views are personal and not of any company mentioned in the blog posts. All content provided on this blog is for informational purposes only. The owner of this blog makes no representations as to the accuracy or completeness of any information on this site or found by following any link on this site. The owner of this site will not be liable for any errors or omissions in this information nor for the availability of this information. The owner will not be liable for any losses, injuries, or damages from the display or use of this information.